We have 56 escorts on Massage Republic that offer Spanking: Spanking is the act of hitting the buttocks of another person to cause temporary pain, it generally involves one person striking the buttocks of another person with an open hand. Spanking is the 24th most popular service in Makati City among female escorts. In some countries When an open hand is used, spanking is referred to as slapping or smacking.

This normally does not produce physical injury. More severe forms of spanking, such as switching, paddling, belting, caning, whipping, and birching, involve the use of an implement instead of a hand and can cause injuries. Prices range from ₱2,994 to ₱19,997 (US$ 58 to US$ 393), the average cost advertised is ₱7,410 (US$ 145). 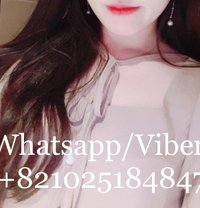 Asian Model Escort KATRINA LEE Independent Escort (female) Now in Philippines^^ (**My number is on my photos here**) WHATSAPP/ VIBER only~ I'm REAL not fake~ NO AGENCY, you're directly talking to me~!!^^ I'm irreplaceable, I'm stuffy but liberate, fickle but faithful, loves to laugh, loves to be cuddled..^^ I value ones inner personality than their cover, I can be cocky at times..^^ Frankly, I'm not an angel, I'm a little devil in disguise.. I see myself just like any normal and…

The Fairest of them All

The Fairest of them All

Men sometimes needs special treats to escape from exhausting, boring and stressful life.. Hi Babe!! My name is Jonna, mix Fil-russian from the Philippines, working as adult webcam model and part time escort service.. I am very sweet and passionate woman, let me drive you crazy with my perfect body and a combination of sweet and gorgeous…

A sexy mix of east meets west, Dasha, is a beautiful girl with an Asian twist. She’s got a naughty personality with a girl next door charm, she’s a sexy petite little package, slim body, and light mocha skin. She has a smile that is warm and friendly and will make…

MISTRESS ZETH IN MANILA.... limited time only My rates & time are based per sessions (2hrs) no more no less.and all are in US currency. (NO DEPOSIT NO SESSION- manila session only) deposit acceptable via etherium/ bitcoin / paypal/ or local/intl bank…

lets go baby,,if u want some satisfucktion and full of passion in love making,,just babe me up..lianne here i have big boobs and big butt for you..im alaways horny,wet i want some hard fucking moment all the time,,

THE BEST OF ALL HOLES! Three holes are better than ONE! Not your ordinary voluptuous girl. The ultimate GFE you never had. A perfect travel buddy as well and very fun and sexual in and out of the sheets. A sweet classy, educated, fun, 100% real, clean and dd…

I am catherine I can host staying in a 4 star condominium,,Are you looking for real happiness And no rush unforgettable services? I'm the right person you are looking for My name is cath 22 young of age Mixed Spanish and Filipina blood I'm available 24/7 Wat…

My name is Steffanya Madrigal , 22 years old Mixed blood of Spanish filipina Eurasian" I can be your girlfriend experienced For a short period of time I can host I'm alone in my condo staying in very safe descent condo Viber and WhatsApp are…

THE GIRL YOUR MOTHER WARNED YOU ABOUT I'm mistress/dominant hera. A divine lady who sadistically indulges in discipline, humiliation, feminization and fetish lifestyle. If u want to be my slave and have a session wth me just call or messege me salope! I…

Girlfriend Experience you deserve to give u finest pleasure in no rush.. Exotic beauty openminded..sweet with passion, flexibility, cheerful, good companion inside or outside, Love to travel around globe, enjoy lifestyle while young and hottest, friendly,…

🏻 Gentlemen My name is babygirl young 21.all the way from two countries japan 🇯🇵 and Philippines , which mean mix blood ,i am here to giving mens desire

No rush moment, you will enjoy every seconds that you are with me. Hot, sexy,

All escorts in Makati City

You may only enter this website if you are at least 18 years old (or the age of majority in the country you live in) - if not, you cannot enter the site. If you are accessing this website from a country which prohibits access to adult content or any associated activities, you do so at your own risk. It is your responsibility to comply to local laws. This website only provides a service which allows adult individuals to advertise their time and companionship to other adult individuals. It does not not provide a booking service, arrange meetings or take payment on behalf of an advertiser (or any commission from them). Any price indicated by an advertiser relates to time only and nothing else. Any services offered, or inferred - in addition to time - are the choice of consenting adults and a private matter to be agreed between each party. In some countries, people do not legally have the choice to decide any of the above; it is your responsibility to comply with local laws.

This site uses cookies. By continuing to browse the site, you are agreeing to our use of cookies.